It's Time to Ban Spoons and End Obesity 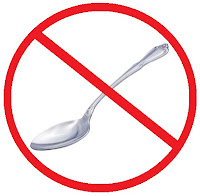 In 2004 the US Centers for Disease Control and Prevention (CDC) ranked obesity as the number one health risk facing America.  Obesity currently results in an estimated 400,000 deaths a year in the United States and costs the national economy nearly $122.9 billion annually.  Experts believe that obesity will soon become America's number one killer, overtaking smoking and leaving other forms of death such as car accidents, gun violence, and terrorist attacks in the dust.

For far too long America has been in the grips of the special interests that lobby our congressmen and have hijacked our government to keep Americans addicted to the #1 cause of obesity: Spoons.  But all that is about to change.

Having a rational debate about the undeniable relationship between America's obsession with spoons and our obesity epidemic is no longer taboo.  Ever since Mayor Bloomberg heroically led the country in protecting us from the evils of large sugary drinks, people everywhere are becoming more used to the idea of applying this kind of forward-thinking leadership in other areas.

Just a few years ago the ignorant individualists clinging to their spoons would protest that we as a country have no right to regulate or ban their use.  Thankfully, as a result of our new free health-care system, these ignoramuses can no longer hide behind this excuse.  We are all paying for each other's health-care, and if you harm yourself through the criminal use of spoons, then we all suffer the consequences.

The pro-spoon pro-obesity pro-death industrial complex is finally losing its iron grip on our country.  We are at the tipping point.  Now is the time to act.   I will prove without a shadow of a doubt that spoons cause obesity, and I will give you the solution for how we can end obesity once and for all by enacting responsible Spoon Control legislation on the path towards a total ban of this evil utensil.

The Evidence is Undeniable

Study after study has proven the relationship between spoons and obesity.  Recent studies surveying every country on the planet have established an irrefutable link between countries that have a high number of spoons per capita and the percentage of the population that is obese.  A random sampling of these countries clearly show that the trend line of spoons per capita is a perfect match with a country's rate of obesity.


The logic is obvious.  As we can see above, the western countries including the United States, the UK, Australia, New Zealand, and Canada all have a high rate of spoons per capita and a correspondingly high rate of obesity.  As we move to the Asian countries such as South Korea and Japan, their obesity rate dramatically decreases along with their lower number of spoons per capita, as they use chop sticks.  Finally, the more enlightened countries such as Haiti, Ethiopia and Zimbabwe have virtually no spoons at all and they have managed to completely eradicate the plague of obesity.

More spoons = more obesity.  There is no other possible explanation.

No One Needs a Spoon

The founders of this country used wooden spoons to eat their simple meals, and they never would have dreamed that in the future these utensils would be used to consume the incredibly fatty foods that Americans eat today.  Luckily, the American forefathers were smart enough to found this country with a constitution that is a living document and is flexible enough to face the challenges of our changing world.


Clearly, no one has a legitimate reason to own a spoon in this day and age, as they are only used today to consume large amounts of unhealthy and fatty foods.  A simple knife and fork is all that is needed to eat a healthy diet of fruit, vegetables, whole grains, dairy products, and meat.  For those that insist on eating soup and cereal, surely they can just drink it directly out of the bowl.

Unfortunately, many Americans are so brainwashed towards the use of spoons that we may not be able to enact a complete spoon ban right away.  In that case we can at least start with responsible Spoon Control legislation, such as no more than 1 spoon per household, with compulsory spoon registration to ensure this regulation is enforced.  Only teaspoon sized spoons should be allowed, as anything larger is just asking for abuse.  In addition, we must ensure that properly registered spoons are kept at least 15 feet away from the refrigerator where fatty foods like ice cream are stored.  But even these steps will not stop the obesity epidemic; we will never eradicate ourselves of this horrible disease until every last spoon is destroyed.

Do it for the Children

It's one thing to try and make an argument that adults should be able to make their own choices when it comes to spoons, but that logic does not apply at all when we talk about the children.  Children are young, and sweet, and innocent.  If we don't come together as a nation and protect them from the evils of spoons, no one else will.

Consider how the pro-spoon pro-child-obesity lobbyists have infiltrated the media and programmed our children to love spoons before they could even understand what they were watching.  The most obvious example was the cartoon show "The Tick", where the supposed hero's catch-phrase was, you guessed it, "Spooooooooon!" Is there nothing these monsters won't do?
﻿

The pro-spoon media programming was just the beginning.  Over the last 30 years childhood obesity has tripled.  According to the CDC, in 2008 more than one third of children and adolescents were overweight or obese.  The following chart shows the vicious cycle of how spoons lead to childhood obesity and to a lifetime of misery.  Even worse, the cycle continues from generation to generation, with parents blindly passing on their spoon addiction to their children.  If these parents cannot keep spoons from their children to keep them fit and healthy, we as a country must do it for them.  It is time to break the cycle! 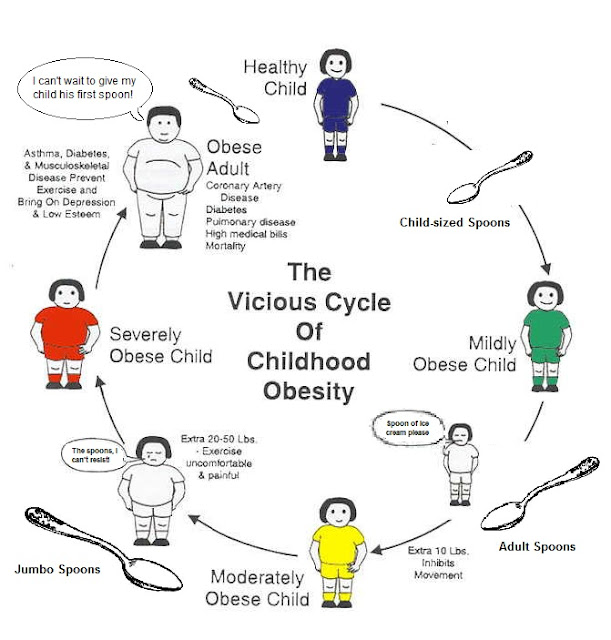 What You Can Do About It

Now is the time to finally put an end to obesity once and for all.  Luckily the solution is very simple.  You don't have to persuade and convince others to stop using spoons and becoming obese, and you don't even have to try and forcefully stop them yourselves.  All you have to do is sign this petition and demand that our government enact responsible spoon control legislation!

The great thing about our country is if we can get enough people behind this movement we can force everyone else to do what we want.  When someone else isn't smart enough to do the right thing, we can force them to do it through our government.  It's called democracy

, and it's what makes America the freest country in the world.

So please, if you care about children, and if you want to stop obesity, sign the petition and join us in this heroic battle of good versus evil. 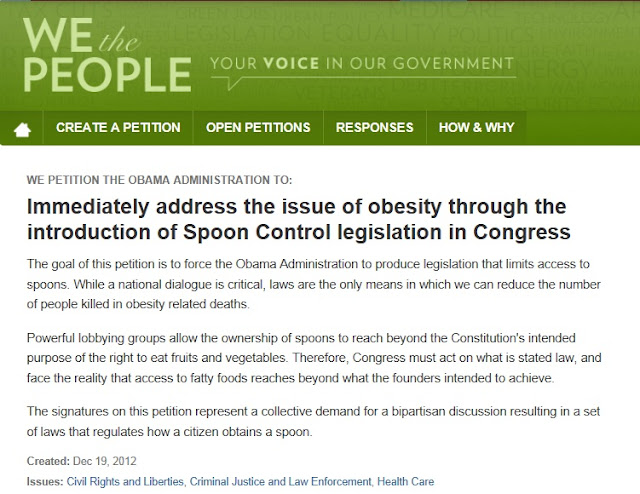