Should Libertarians Celebrate the SCOTUS Ruling on Same-Sex Marriage? 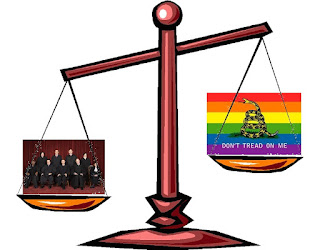 The Supreme Court of the United States has made several headline-generating decisions in the last week.  In a 5-4 ruling, this august body of the country's premiere jurists issued an irrevocable command to 13 states that banned same-sex marriage.  Going forward, all states will be required to license same-sex marriages and recognize those marriages entered into from other states.

The Libertarian Party has used this opportunity to showcase how forward-thinking and ahead of the times they are, publishing the headline "Libertarian Party's 40-yr marriage equality advocacy pays off with US Supreme Court decision".  Nicholas Sarwark, Chair of the Libertarian National Committee, said "we applaud and celebrate this victory" and that he's "glad to see the Supreme Court has upheld the equal rights of all Americans."

Certainly, libertarians can be happy at the outcome of the SCOTUS decision.  Unjust laws that forcibly prevented consenting adults from engaging in voluntary contracts have been reversed.  What's not to like?  Perhaps the optimum libertarian solution would have been to remove the violence of government from the marriage business completely, leaving it to churches and individuals to create their own contracts as they see fit.  Nevertheless, individuals are freer than they were before.  How could this not be a clear-cut win for liberty?

This question brings us to examine the means and ends of this event.  We might be happy with the outcome, but should we be wary of how it came about?  For the constitutionalist, this is likely to be no time for celebration.  Under an intellectually honest view of the constitution, there is no language that gives the federal government the power to infringe on state legislation in this way.  As one dissenting judge wrote,


“If you are among the many Americans — of whatever sexual orientation — who favor expanding same-sex marriage, by all means celebrate today’s decision…  Celebrate the achievement of a desired goal.  Celebrate the opportunity for a new expression of commitment to a partner.  Celebrate the availability of new benefits.  But do not celebrate the Constitution.  It had nothing to do with it.”

But of course, being a libertarian does not make one a constitutionalist.  We have a much brighter lantern to guide our way than our weak and powerless constitution.  Using the dual lens of self-ownership and the non-aggression principle, it is clear that consenting individuals have the right to enter into whatever sort of contract among themselves that they'd like.  On the flip side, individuals do not have the right to force their contract onto others, which is why getting government out of the marriage businesses would be the ideal solution.

In a free market of marriage that respected the property rights of everyone, perhaps some religions would offer same-sex marriage contracts while others would not.  Maybe new institutions would offer this service completely outside the religious temple.  From there, various voluntary solutions and market-based incentives would meet everyone's preference accordingly.  If some don't like it, there are plenty of non-violent options available that don't infringe on the rights of others.  Certainly this would be the outcome most aligned with each individual's rights being respected.  "Live and let live", it's a beautiful mantra.

In lieu of this optimum scenario, the question is again asked, should libertarians celebrate a ruling from the Supreme Court of the federal government that forces the states to license and recognize same sex marriage?  Without any regard to the merits of the constitution, the answer would be a qualified no.  The SCOTUS ruling brings about a libertarian end, but the means involved is quite counter to our long term goals.  Ultimately, this deference to 9 black-robed individuals governing 318 million people from D.C. is just one more precedent that is sure to be harmful to the long-run prospects of a free society.

Beware the Hand that Feeds You

Despite the LP's celebratory announcement, we should be hesitant to shout hosannas when a Supreme Court ruling dictates law to the states.  Every decision from that unelected and virtually unaccountable group that gives the federal government greater power is a net loss for liberty - even when libertarians are happy at the particular outcome.

Today, the SCOTUS issues a decree that happens to be consistent with libertarian principles, but literally the day before it issued a ruling that the federal government can pass laws requiring citizens of the 50 states to purchase a product from a private company.  How can we celebrate any decision passed down from such a bold and audacious body?  Why give any respectability to their decisions?  We are just shooting ourselves in the foot.  What happens to our credibility if we say that a supreme court decision "paid off" when they will not doubt issue 99 rulings that violate libertarian principles to every 1 decision that goes in our favor?

We can't just celebrate the outcome of this decision in a vacuum; all the factors must be examined before popping the champagne.  In a world where virtually every square inch is claimed to be the domain of one evil government or the other, in most territorial battles between rival gangs of costumed officials we are safe to say "a pox on both their houses".  But when one of those gangs is infinitely more powerful, more ruthless, and more arrogant than the other, we should seriously consider rooting for the underdog.  In other words, if we are stuck in a world of governments, the greater good is federalism.  I would rather have 50 separate rulers that each have a kingdom of 500 thousand to 38 million people than one supreme ruler that dictates the lives of 318 million people.

As much as I'd like to just ignore the evil doings of the criminals who presume to rule over me, I do so at my own peril.  If we want to fight back in the political arena, let's choose our battles wisely.  Individual libertarians can actually do something at the local level, whereas we have virtually zero control over what happens in the district of criminals.  So if we want to fight for marriage equality, or more precisely, the right of individuals to enter into voluntary contracts, then let's fight those laws where they exist.  If we find them at the city level, fight them there.  If they are at the county or state level, then bravely go forward into battle.  But if the struggle seems insurmountable, don't be so foolish as to celebrate when an even greater threat to liberty takes on your foe.  That hand may feed you today, but it will certainly strike you tomorrow.

A Dream for Soundbites 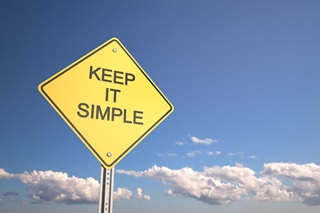 Do things have to always be so damn complicated?  It seems the prudent and principled libertarian is doomed to never accept simple, one word answers.  We can never say just "yes" or "no", it's always followed by a "but".  This isn't the result of a complex philosophy - what could be simpler than the self-evident proposition that individuals should control their own lives as long as they respect the rights of others?  Unfortunately, it's a result of the statist climate we live in, where every question seems to presuppose a government answer.  We're constantly asked the no-win question, "have you stopped beating your wife?"  While we carefully explain our position with logic and attention to detail, our opponents keep things simple by playing on the ignorance and desire for immediate gratification of the American boobousie.

As the nation collectively knee-jerks into total insanity by banning the confederate flag, even at relevant historic sites, we find ourselves in the same nuanced situation.  Libertarianism is the foremost philosophy against the evils of slavery and we obviously condemn the Confederacy for their crimes.  But the Civil War wasn't a fight over slavery, it was about secession.  The North invaded the South to prevent their independence, and we can only speculate into the realms of alternative history as to how things would have turned out if the slaves were freed at a different time and under different circumstances with the noble right of secession left unscathed.  Instead of an easy question such as, "are you against slavery", we ask the more complex question, "did the happy outcome of freeing the slaves outweigh losing the right to secession?"

There was a day when the phrase "I may disagree with what you say, but I will fight for your right to say it" was pure Americana.  Now things aren't so clear.  Rather than wanting to be free to exercise one's rights while respecting the rights of others, now serious talk is made of putting limitations on our rights to prevent hurt feelings of self-worth or entitlement.  In the era of victimhood, the desire for privileges to remedy some real or imagined inequity trumps all.

How ironic that during these side-show events with the SCOTUS ruling for same-sex marriage and the extreme PC battle against the confederate flag, the main event is getting the faintest attention.  Of course the Trans-Pacific Partnership would be passed by the Senate while the legacy media covers such critical news as the defacement of statues and changing the names of lakes.  After all, it's just a secret treaty that that will create an international governing body that, once created, will be a living thing - dictating laws to contracting nations just as the European Union forces policy on the nations of Europe.

Just as there was once a day long past when state sovereignty was respected and the constitution was a real barrier to the inclination to power in Washington, we may quickly be coming to a time when we will fondly remember the days when the Supreme Court made the laws for our nation - at least they claim to be American!  If our cries of righteous indignation barely register a whisper to our elected representatives at the federal level, what hope do we have as we transition to a regional government, let alone a world government?

As much as I'd be delighted to celebrate a victory without reservation, we need to keep our eyes on the bigger picture.  It's not enough to simply support every event that claims to be a win for liberty, we must ensure that the means by which it is achieved is also aligned with our best interest.  If given a devil's choice between a world government with a "libertarian" dictator and what we have today, I'd begrudgingly but wisely side with the latter.  Hayek showed us why "the worst get on top", and once a governmental mechanism is created it is nearly impossible to dismantle.  Like some suicidal robot programmed for destruction, the benevolent dictatorship will attract every form of sociopath who will attempt to seize those reigns of power.  If history is to be our guide, whenever this happens hundreds of millions die as a result.

Let's be smarter than that.  We cannot accept the easy victory on a minor battle when it ensures that we will lose the war.  In a world full of competing states, the crafty libertarian learns to pit his enemies against each other.  While we unambiguously denounce all forms of force and violence against the innocent, we learn to make unlikely alliances to fight the greatest evil: the nation over the world government, the state over the nation, the city over the state, and most importantly, the individual over them all.
Posted by Nathan at 9:46 AM